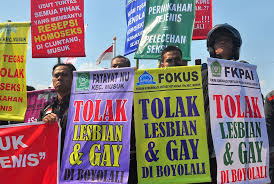 Ersland Roma Sidjabat
An MSW candidate from Monash University Australia, specialise in Human Rights Advocacy and Criminology. He attended PPM School of Management graduated in 2015 with a Master in Management, and earned Bachelor of Law (Sarjana Hukum) in 2011 from Parahyangan Law School.

Australia has just found the result of marriage postal survey regarding the same-sex marriage (SSM). Roughly 61,6% of Australian citizen has voted for a ‘Yes’ to SSM, which will put pressures towards Australian Parliament to pass the bill. This event intrigues me to further discuss the LGBTIQ and where it might sit in Indonesian community. According to Winsor (2017), more than 840 million people now live in countries where SSM is legal. There are 25 countries around the world that have made the SSM legal, it will have moved to 27 countries by the end of the year if the Australian and Taiwan’s Parliament has passed the bill before Christmas 2017. It is quite an irony knowing that former Indonesian ruler, for 350 years, the Netherlands became the first country on Earth who legalise SSM in 2001. Whereas, on the other hand, Indonesia remains predominantly homophobic. Further to that, in 2017, four countries have legalised the SSM (Finland, Slovenia, Malta, and Germany), and two countries are still processing their bill in the parliament (Taiwan and Australia).

The abbreviation LGBT has slightly shifted to LGBTIQ in the recent year. It stands for Lesbian, Gay, Bisexual, Transgender, Intersex, Queer, and Questioning. Most of us might have been familiar with the term lesbian, gay, bisexual, and transgender. But for some of us intersex, queer, and questioning perhaps remain unrecognised. According to Hughes (2002) intersex is ambiguous genitalia of the newborn that could be categorised as a rare disorder. So, intersex is considered as physical abnormality rather than a sexual orientation. Whilst queer is an umbrella term for anyone who may identify as being either gender, sexually and/ or bodily diverse (UQ Union 2017). The last term ‘questioning’ describes someone who is in the process of exploring their own sexuality and/ or gender.

The Indonesian government remains vaguely ban the existence of LGBTIQ. In spite of the non-existence of gay-banning regulation, the government and the community constantly persecute this community. Perhaps the gay population increment becomes the main reason as to why they were persecuted. Indonesian Ministry of Health in 2013 reported that at least 1.095.970 LGBT individuals live in Indonesia. The United Nation provided a greater number, they predicted that over three million LGBTs live in Indonesia in 2013. The number would have been greater if we had included the intersex population. There is a high probability that this number has become larger this year. Having said that, they remain the minority group of people, with only 3% of the Indonesian population. Their situation is aggravated by the lack of support from the community, and even worse, their close family.

Indonesia is a religious-secular country. It only recognises six religions ie: Muslim (Sunni), Christian Protestant, Catholic, Hinduism, Buddhism, and Confucius. I will not delve into the religion’s specific dogma regarding LGBTIQ, however, I believe that all the legitimate religion in Indonesia adamantly oppose the idea of same-sex relationship. It is manifested by the persecution and discrimination suffered by the LGBTIQ community.

Spitzer (2003) in his research about sexual reorientation therapy found that 79% of 200 participants identified the conflict between religious beliefs and same-sex behaviours. Whereas, 93% of the participant stated that religion was very important or extremely important in their lives. Flentje et al. (2014) who also studied about the reorientation therapy, revealed that 97,3% of their participant had left religious communities that held a negative belief about LGBTIQ individuals, with 61,1% of these individuals doing so after reorientation program. They also found out that almost all of their participant did not leave their religion, rather, they integrate their identity with religious belief. The data shows the irony that most of the LGBTIQ people still believe in something that rejects their existence.

Human Rights Aspect within the Issue

Many research has shown that sexual orientation is incurable. It was given to them as a part of their life. However, Indonesian people believe that the LGBTIQ phenomenon is the repercussion of an unholy life, and blaming the trend of atheism way of life as the main cause. It then leads the Indonesian community to perceives gay people as an abnormal human being. Surprisingly, it has nothing to do with atheism at all. As explained in the previous section, you may find a gay person who is practising Christianity. The most notable example perhaps Australian parliament member Penny Wong and Senator Dean Smith, both of them are gay and a devout Christian. Once again, I have to underline that I will not delve into the religious dogma. I was just trying to promote a notion that seeing them as a human being rather than a sinner, would bring a better result. Because at the end of the day, they are human being just like you and me, only with a different sexual orientation. They have the right to a make a living, to be heard, be safety, get access to public services, and any other human rights that all of us have had.

The United Nation has passed several charters and resolutions to protect the rights of LGBT. They were ratified by more than half of the UN members including Indonesia. Moreover, Indonesia has never specifically banned homosexual activity among adults. Thus, basically, homosexual activity is not a crime. However, any notion or idea to bring gay rights a little bit further, for instance, freedom of expression or gay people de facto partnership, is a ‘no-go’, let alone the gay marriage. According to the Sydney Morning Herald (Topsfield, 21 October 2017), Indonesian Defence Minister Mr Ryacudu stated that out of the blue the gay community is demanding freedom. There is a suspicion floating around the Indonesian government that the ‘Western World’ is trying to promote gay right to disturb national stability, and focussing on gay marriage in a long run. Ryacudu later argues that this campaign might threat Indonesian religion and culture of heteronormative society. But in order to show consistency in this writing, I will not delve into that area. I would rather discuss how the gay marriage rights potentially outweigh the religious liberty.

Religion bodies obviously have been the most vocal parties to oppose gay marriage. However, it might be significantly reduced if the gay marriage was legalised. Article 18 ICCPR makes clear, the right to religious liberty can be limited when necessary to protect other important rights. What do the ‘other important rights’ mean? The ‘other important rights’ is any other human rights that are stipulated thoroughly in an anti-discrimination act or Undang-undang Penghapusan Diskriminasi for instance. So, what sort of impacts that are potentially faced by Indonesian community? Three major impacts might occur in such situation, for instance, impact in the school curriculum, impact on free speech, and impact on religion. In the education, the school will be obliged to teach gay activity. It entails the school obligation to teach the student that their gender is fluid. For religion-based school, this situation might be difficult, because teaching God’s teachings in relation to the LGBTIQ means violating the law. In terms of free of speech, individual who expresses their anti-gay marriage might be deemed as committing a crime. At the end of the day, it might prevent churches, mosques, other religion, and any anti-LGBTIQ religion-based organisation from spreading the God’s word especially in relation to LGBTIQ.

As concluded in thousands of research, LGBTIQ is not a disease and unlikely to be cured. Thus, it is fair to say that people who trapped in this kind of circumstances have no other choice than to live the life they were given. If we have known this, why would we alienate and even worse persecute them? And also, we tend to put an ‘abnormal’ label on their chest, judging their morality, or their relationship with their God. As a fellow human being, I believe it is our duty to protect them, give the space they deserve, and pray for them. It is not our job to judge their sin. If we believed that God hates their deed, let God be the judge. Because we are not the expert on God’s mind.

Having said that, Indonesia is so far away from gay rights or marriage legalisation, perhaps for an unknown period of time. Considering all the potential drawbacks of gay marriage legalisation as well as the Indonesian community characteristic, I would argue that asking more freedom and acknowledgement for the gay community in Indonesia today is impossible. But Indonesian law is somewhat saggy for gay people to live their life. So, what we could do now is trying not to harm them with all the bullying and persecution. It really helps them a lot.